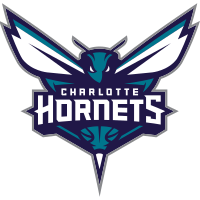 The Charlotte Hornets are an American professional basketball team based in Charlotte, North Carolina. The Hornets compete in the National Basketball Association (NBA), as a member of the league's Eastern Conference Southeast Division. The original Hornets franchise was established in 1988 as an expansion team, owned by George Shinn. In 2002, Shinn s franchise relocated to New Orleans and became the New Orleans Hornets. In 2004, the NBA established the Charlotte Bobcats, which was regarded as a new expansion team at the time. In 2013, the New Orleans franchise announced it would rebrand itself the New Orleans Pelicans, ultimately returning the Hornets name, records, and official history (spanning from 1988 to 2002) to Charlotte. The Bobcats have officially renamed the Charlotte Hornets for the 2014–15 season.