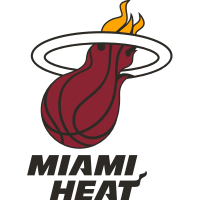 The Miami Heat are an American professional basketball team based in Miami. The Heat competes in the National Basketball Association (NBA) as a member of the league s Eastern Conference Southeast Division. The Heat plays their home games at American Airlines Arena and have won three NBA championships. The Heat holds the record for the NBA s third-longest winning streak, 27 straight games, set during the 2012–13 season. Four Hall of Famers has played for Miami, while James has won the NBA MVP Award while playing for the team.