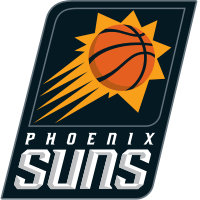 The Phoenix Suns are an American professional basketball team based in Phoenix, Arizona. The Suns compete in the National Basketball Association (NBA), as a member of the league s Western Conference Pacific Division, and are the only team in their division not based in California. The Suns play their home games at the Talking Stick Resort Arena. The franchise began play in 1968 as an expansion team, and their early years were shrouded in mediocrity, but their fortunes changed in the 1970s, where, after partnering long-term guard Dick Van Arsdale and center Alvan Adams with Paul Westphal, the Suns reached the 1976 NBA Finals, in what is considered to be one of the biggest upsets in NBA history. However, after failing to capture a championship, the Suns would rebuild around Walter Davis for a majority of the 1980s, until the acquisition of Kevin Johnson in 1988.